Still shopping for (and stressing over) thoughtful gifts for your friends and family? We’ve got you covered with books on history, language, culture, art, nature, and more. Give the gift of knowledge this holiday season, and get 30% off these titles with code HOLIDAYS18 at checkout.

For your dad, the history buff.

Alabama: The History of a Deep South State, Bicentennial Edition is a comprehensive narrative account of the state from its earliest days to the present. This edition, updated to celebrate the state’s bicentennial year, offers a detailed survey of the colorful, dramatic, and often controversial turns in Alabama’s evolution. Organized chronologically and divided into three main sections—the first concluding in 1865, the second in 1920, and the third bringing the story to the present—makes clear and interprets the major events that occurred during Alabama’s history within the larger context of the South and the nation.

Also of interest: Alabama: The Making of an American State by Edwin C. Bridges

For your foodie friends.

This book is the story of the Greek immigrant who left his tiny village in the rugged mountains of Greece’s Peloponnesos region for the uncertainty of a new life in a new country. The story traces the founding of the restaurant in 1907 and the family that continues the tradition of fine food and genuine hospitality that began there a century ago.

Also of interest: Barbecue: The Making of An American Institution by Robert F. Moss

Speaking of Alabama: The History, Diversity, Function, and Change of Language edited by Thomas E. Nunnally

For the logophiles in your life.

Written in an accessible manner for general readers and scholars alike, Speaking of Alabama includes such subjects as the special linguistic features of the Southern drawl, the “phonetic divide” between north and south Alabama, “code-switching” by African American speakers in Alabama, pejorative attitudes by Alabama speakers toward their own native speech, the influence of foreign languages on Alabama speech to the vibrant history and continuing influence of non-English languages in the state, as well as ongoing changes in Alabama’s dialects.

For your friends who keep asking you to go camping.

Nature Journal is an innovative presentation of the best columns and photographs from L. J. Davenport’s popular column in Alabama Heritage magazine. Readers of the magazine have come to relish his artful and often witty descriptions of common species encountered in the Alabama outdoors. But Nature Journal is designed to be much more than a mere collection of entertaining essays; it is also an educational tool—a means of instructing and encouraging readers in the art of keeping a nature journal for themselves.

For the members of your book club.

Nebraska Waters is black. Vivian Gold is Jewish. In an Alabama kitchen where, for nearly thirty years, they share cups of coffee, fret over their children, and watch the civil rights movement unfold out their window, and into their homes, they are like family—almost.
As Nebraska makes her way, day in and out, to Vivian’s house to cook and help tend the Gold children, the “almost” threatens to widen into a great divide. The two women’s husbands affect their relationship, as do their children, Viv Waters and Benjamin Gold, born the same year and coming of age in a changing South. The bond between the women both strengthens and frays.

Time in the Barrel: A Marine’s Account of the Battle for Con Thien by James P. Coan

For your uncle who loved Ken Burns’ Vietnam documentary.

For eight months, James P. Coan’s five-tank platoon was assigned to Con Thien while attached to various Marine infantry battalions. A novice second lieutenant at the time, the author kept a diary recording the thoughts, fears, and frustrations that accompanied his life on “The Hill.” Time in the Barrel: A Marine’s Account of the Battle for Con Thien offers an authentic firsthand account of the daily nightmare that was Con Thien. An enticing and fascinating read featuring authentic depictions of combat, it allows readers to fully grasp the enormity of the fierce struggle for Con Thien.

Also of interest: Con Thien: The Hills of Angels by James P. Coan

Among the Swamp People: Life in Alabama’s Mobile-Tensaw River Delta by Watt Key

For your cousin who’s writing their first novel.

Among the Swamp People is the story of author Watt Key’s discovery of the Mobile-Tensaw River Delta. “The swamp” consists of almost 260,000 acres of wetlands located just north of Mobile Bay. There he leases a habitable outcropping of land and constructs a primitive cabin from driftwood to serve as a private getaway. His story is one that chronicles the beauties of the delta’s unparalleled natural wonders, the difficulties of survival within it, and an extraordinary community of characters—by turns generous and violent, gracious and paranoid, hilarious and reckless—who live, thrive, and perish there.

Also of interest: Fanning the Spark: A Memoir by Mary Ward Brown

Grandeur of the Everyday: The Paintings of Dale KenningtonIntroduction by Daniel White, Conversation with Kristen Miller Zohn, Essay by Rebecca Brantley

For your sister who binge watches Bob Ross’ The Joy of Painting.

Grandeur of the Everyday is the first full-length volume dedicated to the life and work of Dale Kennington—an accomplished master of contemporary American realism. Kennington’s works often hold a strange familiarity, even for those coming to her work for the first time. Her paintings are at once familiar and yet defy specificity of place, clear and lucid while also dense in content. These effects derive from her unique ability to capture the essence of everyday living, the ordinary “in between” moments we often overlook in our day-to-day habits and transactions.

Also of interest: Visions of the Black Belt: A Cultural Survey of the Heart of Alabama by Robin McDonald and Valerie Pope Burns

Fascinating Foods from the Deep South: Favorite Recipes from the University Club of Tuscaloosa, Alabama by Alline P. Van Duzor

For your grandmother, the best cook you know. (And also anyone who has had the pleasure of trying the University Club’s bread pudding.)

In the University Club’s early years, the major force behind the gracious dining at that elegant antebellum house was Alline P. Van Duzor, who presided over the club with a will as strong as the cast-iron skillets that hung in her kitchen. Her tempting cuisine attracted many loyal diners to the club who invariably asked for the recipes. This cookbook was the result, written by Van Duzor in 1961 in characteristically straightforward style, and when originally published, it sold through at least eight printings.
The more than 250 mouth-watering recipes from the Old South contained in the now-classic cookbook are written with easy-tofollow instructions, using common fresh and store-bought ingredients. This new edition has been augmented by a guide to portions and food brand names, an index to the recipes, and an appendix of past presidents of the University Club Board.

The Road South: Personal Stories of the Freedom Riders by B. J. Hollars

For your woke aunt who reads The New Yorker.

While much has been written on the Freedom Rides, far less has been published about the individual riders. Join award-winning author B. J. Hollars as he sets out on his own journey to meet them, retracing the historic route and learning the stories of as many surviving riders as he could. The Road South: Personal Stories of the Freedom Riders offers an intimate look into the lives and legacies of the riders. Throughout the book these civil rights veterans’ poignant, personal stories offer timely insights into America’s racial past and hopeful future.

Also of interest: Thirteen Loops: Race, Violence, and the Last Lynching in America by B. J. Hollars

Sadly, Kennington passed away in May at the age of 83 before the book’s completion. But she was deeply involved in the publishing process, even selecting the paintings for inclusion.

A reception will be held tomorrow evening, August 15 at the Wiregrass Museum of Art in Dothan, Kennington’s hometown for most of her life, to mark the book’s release. The reception – set for 5:30 to 7:30 p.m. − is free and open to the public. Copies of the book will be available for purchase.

Kennington referred to her paintings as “merged memories.” Combining elements of photography, memory, and imagination, Kennington’s art is an entrancing blend of contemporary and magical realism, with themes ranging from loneliness to community and culture, from class and race relations to the juxtaposition of private and public life. Rather than study the spectacular, she concentrated on commonplace moments of human interaction, inviting observers of her paintings to ponder their significance and to complete their implicit narratives. Often relying on local subjects for her paintings—barbershops, bars, restaurants, gospel concerts, motel rooms, nursing homes—she presented a diversity of local experience. 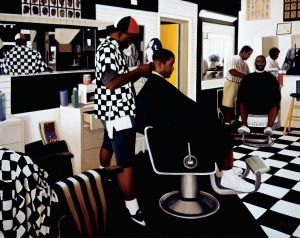 Grandeur of the Everyday is a treasure trove of her most accomplished creations and features both Kennington’s easel paintings on canvas as well her freestanding wooden folding screens. The volume also offers an original interview with the artist conducted by Kristen Miller Zohn, an introduction by art historian Daniel White, and a critical essay by the director of the Wiregrass Museum of Art, Rebecca Brantley. 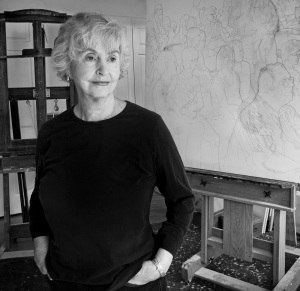